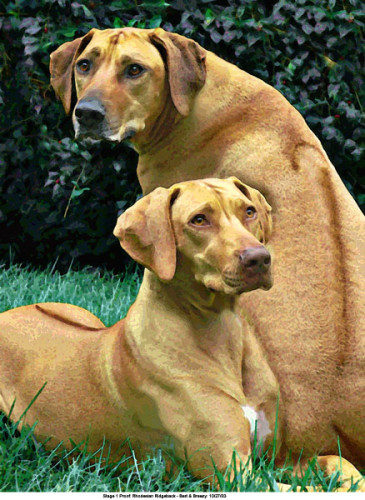 I got my first ridgeback in 1994 from the original founders of Bridon Ridgebacks and have been hooked on the breed ever since.   Jim & Donna Theile from Newtonsville, OH founded Bridon Ridgebacks in 1979 and bred until 1999 when I took over their breeding program.  During that time, they bred and owned over 100 Champions and had several dogs that had outstanding performance careers, including my first boy, “BERT”, CH Bridon’s Albert Vonderlowen, CD, OA, OAJ, TT, CGC, VC.

Bert was a wonderful addition to my home but when I got him, I had no idea that he would be the reason I got into competition and eventually, I got into breeding.  Bert was the second to last litter that Jim & Donna would ever breed.  A year after getting Bert as a puppy, I went back to Bridon kennels to get another dog.  They gave me, “RAGE”, CH Bridon’s Rage of Angels.  She was older when I got her and had several bad experiences with showing as a puppy.  I spent some time working with her, and sent her out to be shown because she was an absolutely beautiful liver-nosed female.  Much to my surprise, she came back a finished Champion in less than a month, including taking several Best of Breed wins from the classes.

In 1998, I decided to breed Bert & Rage in order to continue the Bridon line.  Jim and Donna were there every step of the way giving me great advice and coaching.  We had 6 pups, which 4 are finished champions.  I kept a cute liver-nosed girl, “BREEZY”, and have been breeding and showing since then.

Bridon Ridgebacks is located near Cincinnati, OH.  All of the dogs are family members first and enjoy the lifestyle of sleeping on the furniture and hanging out in the house when they are not outside playing.  Bert was such a joy to train in performance events, that I breed for outstanding temperaments and sound conformation so they can succeed in a variety of environments and competition events.